Luck was with Tenser and Ehlissa, for information on Yrag's whereabouts was not hard to come by. The fighting man was spoken of respectfully by every man that recognized his name. This only assured Tenser further that he was on the right path, though Ehlissa clung to some reservations... 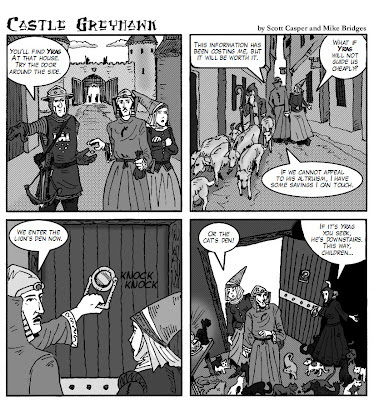 It was not the sort of day for spending indoors. It was a beautiful day in the City of Greyhawk. A fresh breeze had blown in off the Selintan River and chased the stench of the city away. The streets of Clerkburg had been freshly cleaned by the Streetsweepers Union. It was a good day to go for a walk, a better day for a walk with purpose, and a still better day with that purpose shared. 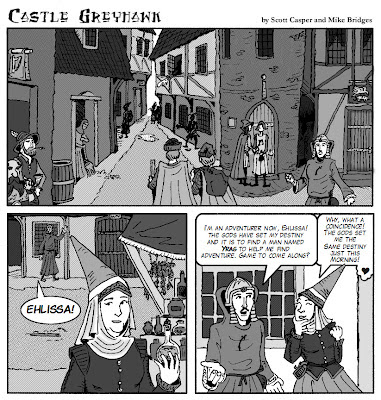 Tenser remained at his table long after his friends had left. The idea to leave his fate to random chance had not been his and now the consequences left a sour taste in his mouth. But he gulped that down with the last of his beer and thought of how to make the best of it... 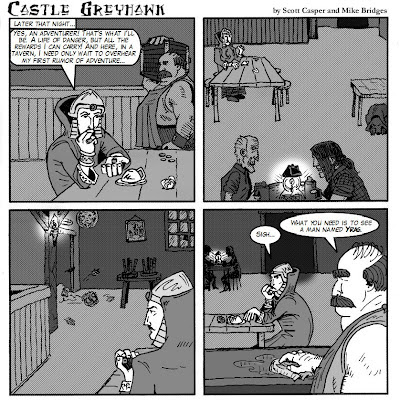 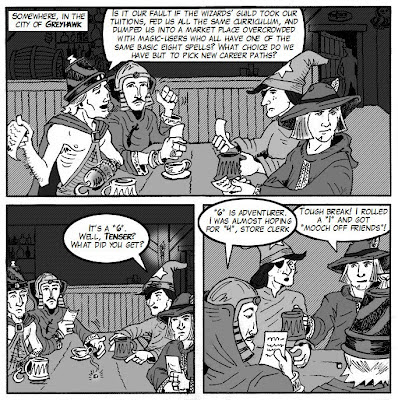 Click on image to enlarge, or view here.
Posted by Scott at 7:45 PM 3 comments:

In 1971, Gary Gygax invited members of his family to play his new game that would become Dungeons & Dragons. The campaign world he created for it would become known as the World of Greyhawk.

In 2005, Mike Bridges started making the W.O.G. comic strip out of his love for both comics and the World of Greyhawk. You can see his work here.

In 2006, Scott Casper started writing a fanfiction novella called "Castle Greyhawk" out of his love for the World of Greyhawk, even though his art skills sucked too bad to make it a comic strip. You can see his work here.

It was only a matter of time before these two lovers of both comics and Greyhawk would join forces. And so the "Castle Greyhawk" comic strip was born. The strip will follow, but also expand on, the novella, which fictionalizes those earliest adventures in the World of Greyhawk. So come with us back in time to when Tenser, Robilar, and all their friends were just fledgling adventurers and the world was young...
Posted by Scott at 6:53 PM 6 comments: