The next morning, Tenser cracked open his spellbook and sat it on the writing table next to the open window of his room. It was a fine book, smartly illuminated with brightly-colored inks that shone in the morning sun. The vellum pages were still crisp and made a sound as each page was turned. There was, sadly, a far greater number of blank pages than spell pages in the book, but this would surely soon change. He imagined the treasure chambers full of spell books and scrolls he would soon recover from Castle Greyhawk.It did not take him long to choose what spell to memorize. He had one for detecting magic that would help in those treasure chambers, but would be useless in winning past their guardians. Luckily, he had a powerful enchantment that would serve him well for at least one battle.

The morning bells rang. Had the hour struck so soon? Tenser had memorized the one spell and then absentmindedly skimmed the remaining pages and dreamed. But it was now too late in the day for dreams. He would have to rush now to meet up with Ehlissa and then join Yrag at the stables... 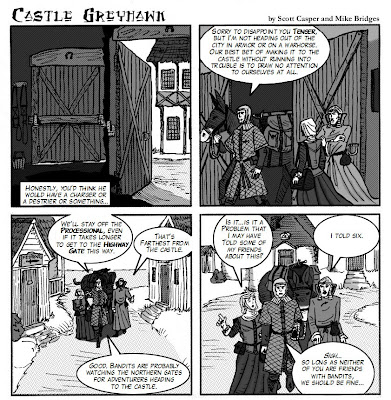 The Velunan Fireamber had burned going down, but left a pleasant aftertaste, warmed the gut, and dispelled all lingering doubts that they were doing the right thing. When they were done, Yrag did not bid them good night or see them to the door, but merely picked up his knife and figurine, returned to his stool, and continued whittling. Tenser and Ehlissa saw themselves out, pausing only to turn down the gift of a cat from Yrag's housekeeper. 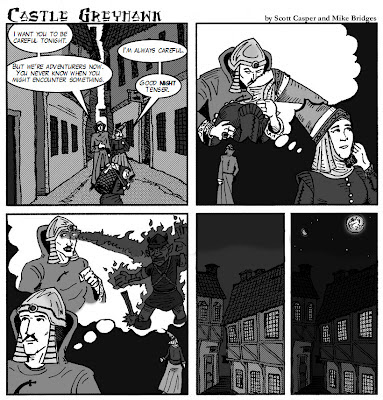