The front door to the Tower of the Mage was still ajar when Erac's Cousin pushed it all the way open. The servant dressed like a monk was lying still on the foyer floor. Dispassionately, but still curious, Erac's Cousin crouched down and checked the body for signs of life.

Erac's Cousin turned his gaze away from his familiar's pursuit of Ehlissa. It was taking far too long to dispose of her, but at least it kept her out of his way. Provided the Mage did not recover, there should be no one left to stand in his way.

At the rear of the foyer began the curved corridor that circled the interior of the ground floor. Erac's Cousin took his time, checking doors as he went. He found two locked doors that Ehlissa had run past. Unlike her, he had a knocking spell prepared once in his own memory, and had it available twice more on scrolls. He was prepared for obstacles like that...but would delay using them as long as possible. Especially since there was an open doorway leading right into the Mage's ground floor study, with the Mage himself right there on the floor of it.

The Spanokian Root had done its job -- indeed, had done its job a little too well. Erac's Cousin had hoped that the Mage would at least stumble further away from the lit brazier after smelling the "potpourri," but the old fool had apparently just stood their inhaling until the drug put him right under. The fire in the brazier was still burning and the fumes from the burnt root were undoubtedly still in the air, making the Mage's body too dangerous to approach closely.

To amuse himself, Erac's Cousin looked around the room and checked the furnishings while he decided how next to proceed. As luck would have it, he found a small hand-washing basin with some water in it sitting on a shelf inside a cabinet. He took the basin out, walked as close as he dared to the brazier, and tossed the contents onto the fire. There was a loud ssssss  and more smoke billowed out from the brazier. He took a step back and watched while holding his breath.

It would be a minute or two still before he dared approach the Mage's sleeping body, so Erac's Cousin turned his gaze back through his familiar's eyes. He now saw that the hunt had moved outdoors since he last paid attention to it... 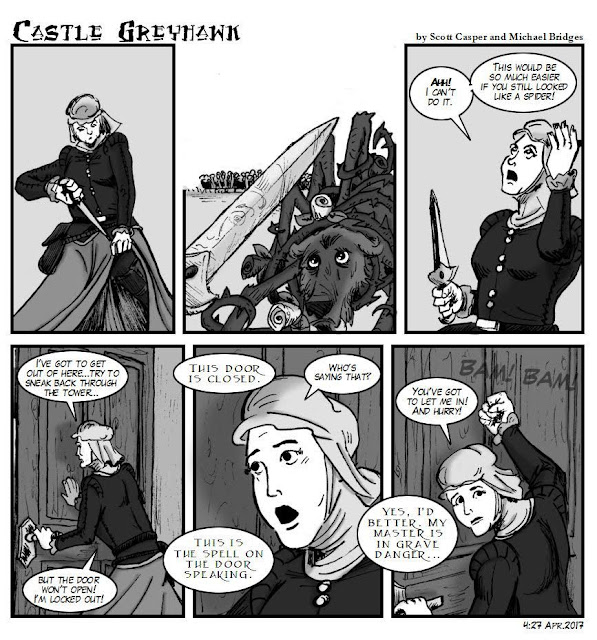 The giant spider tugged relentlessly on the garden door. Ehlissa pulled on the handle with all her might, but was losing ground and in danger of being pulled back into the tower. In moments, she would not be able to contain the monster.

In this, what she feared might be her final moments, she thought of the people she had gone to for help. Robilar. Rary. Yrag. All had failed to keep her from this moment in time. Tenser -- he might not even know she was ever in trouble.

But none of it was their fault. She had fallen for Erac all on her own, and had fallen into the schemes of Erac's Cousin only to find Erac. And now she was alone. She thought there was no one left to help her... 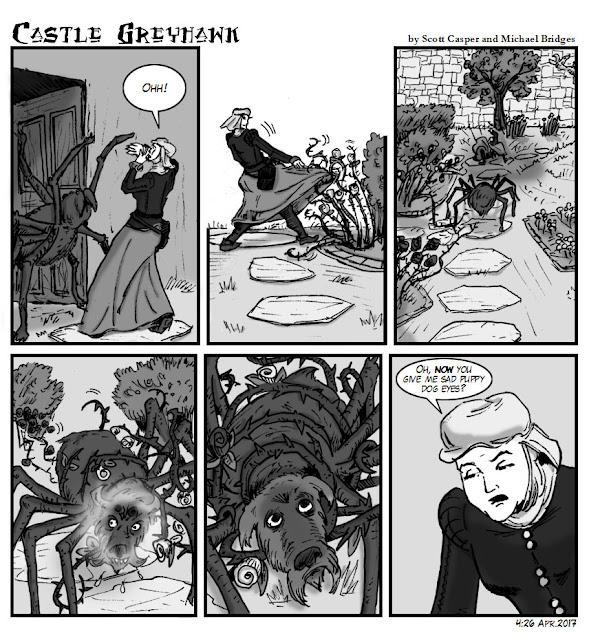