Murlynd waved his metal wand through the air while saying its magic command words. When he was done, he carefully scanned the room while slowly lowering his wand.

Behind him, Yrag and Serten kept Tenser sitting up on the floor, instead of letting him stand, out of concern for how much damage he seemed to be taking.

"I'm fine, really," Tenser said.  And it was mostly true.

"If the spell was an illusion, can we just disbelieve in it and push through?" Yrag asked.

"Intellectually, I share your suspicion it was just an illusion," Tenser said, "but the pain was awfully convincing. I fell back right away when I felt it; I can't imagine how painful prolonged contact would be."

"We could just leave it alone," Yrag suggested.

"We could try to dispel it with magic," Serten offered.

"It's more complicated than that..." Murlynd said, having been listening to them, even though he had not appeared to be. 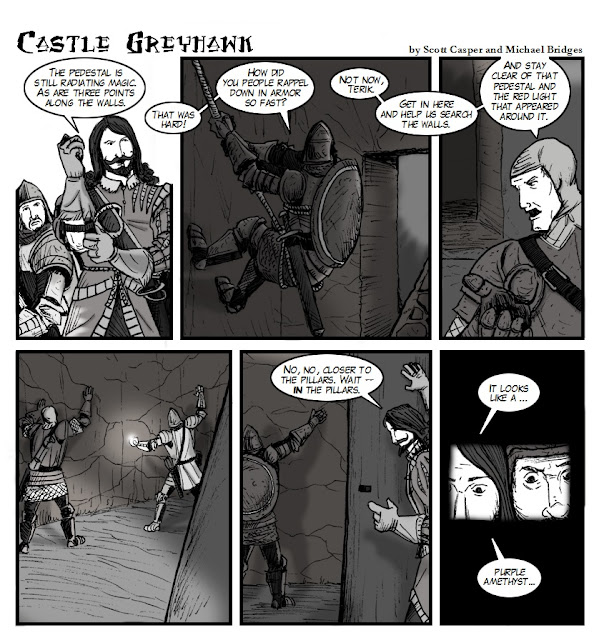 By Tenser's light spell, he could see a relatively small room ahead. Spaced along the walls were embedded pillars that seemed structurally important, since they were not fancy enough to look ornamental. At the center of the room was a small stone pedestal on which rested, what appeared to be, an ordinary stick of wood.

"Could that be a wand...?" Tenser mused quietly out loud to himself. He moved slowly into the room, eyeing the wooden stick now hungrily.

"Wait."  Yrag spoke from a step behind Tenser, forcefully, without being loud. "Don't go rushing ahead again. Don't you think this room might be trapped? We should wait for the others."

Tenser glanced back and saw Serten dropping to the floor of the pit, their rope in his hands. "I have two of you watching my back now, and I only want a closer look." So, ignoring Yrag's warning, Tenser moved closer. 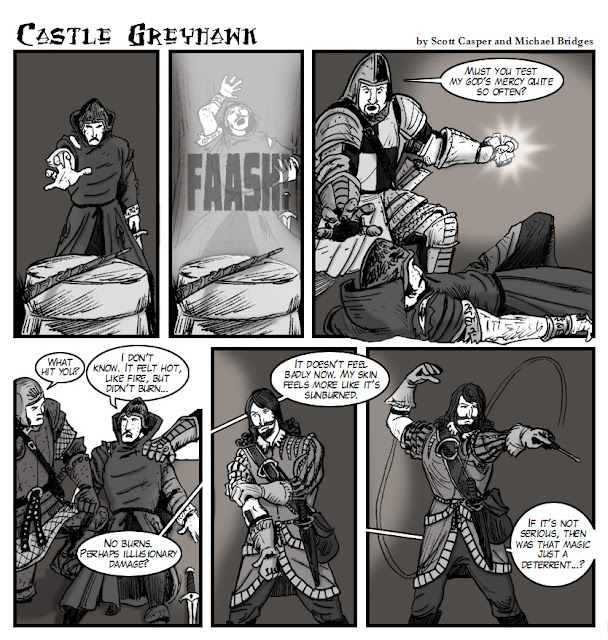 For a painfully long second, Tenser was terrified that he had activated another trap -- perhaps the floor would drop away and he would fall into an even deeper pit, or scythe blades would whirl out of the wall, or maybe the pit would fill with magical fire. Such were the dangers of castle dungeon exploration.

But no trap was sprung. Instead, a section of wall moved just slightly, revealing the outline of a door. Secret doors were as common a feature in castle dungeon exploration as traps, to Tenser's experience, but how to open it? Another hidden panel to press? He needed more hands down here.

"Is anyone coming down?" Tenser said, looking up to the top of the pit.

He had no need to worry on that score, for Yrag already had rope in hand and was starting to lower himself down. 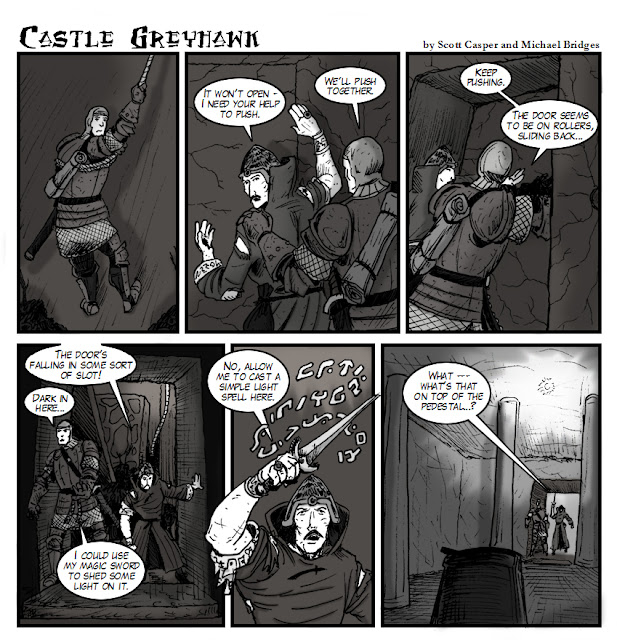