Yrag had started to walk away, stopped, thought better of it, and returned for the saddle bags off his mule. They were heavy with armor and weapons and Yrag sagged from the weight even with both hands. "Time I was getting ready..." Yrag said, but not exactly to Tenser or Ehlissa. Instead he was gazing off in the distance, as if intuiting that they were far enough from the city to expect danger now.

Ehlissa sensed it too. This creeping foreboding, a feeling that the woods were somehow closing in about them... 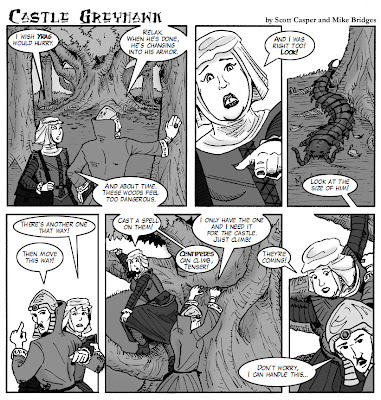 They were on just a trail now, one that they had to follow only single file from time to time. The hills rose and fell around them and were increasingly forested. As their visibility lowered, and the trail narrowed, there was a mounting sense that they had left the safe world they had known for someplace else.

There were hints of it all around. Large rats, rather than fleeing or remaining still at their approach, followed and seemed to be stalking the three humans and their mule. Birds that resembled no breed living in the city circled overhead and gave piercing shrieks. Green things slithered over moss-covered rocks, so camouflaged that only their motion betrayed their presence. To Tenser and Ehlissa, these things were unnatural and unnerving. Whether they bothered or portended anything to Yrag, he gave no indication.

Ehlissa, for her part, dealt with it by talking about what she knew of Castle Greyhawk... 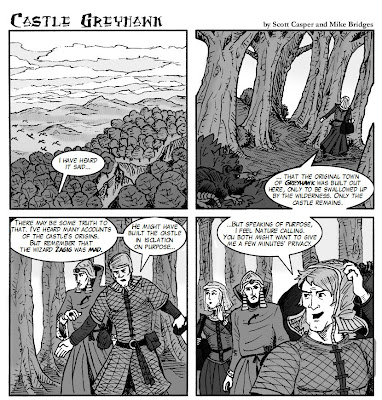 Greyhawk was a sprawling city, but the rough wilderness of the Cairn Hills to the north curtailed its sprawl in that direction. Because of this, Yrag, Tenser, and Ehlissa had quickly left the city's suburbs behind and most of the furthest villages were passed after an hour and a half of walking. The most remote manor houses and fief-like hamlets were now heavily fortified, like small keeps. This was the borderland and beyond it was dangerous wilderness. Somewhere in the midst of that wilderness stood the lonely ruins of Castle Greyhawk. 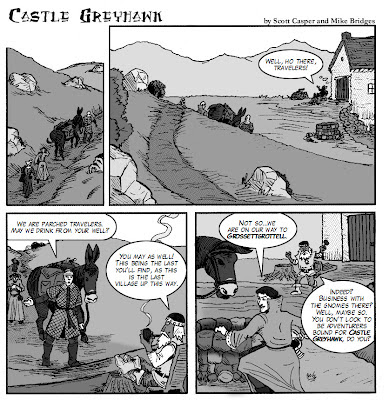