Yrag surprised them both by turning and walking away from the castle.

"We don't need the mule in there," Yrag said as he walked away.  "We need to backtrack a bit and find a place to leave her."

The area around the castle was a 'clearing' only in the sense that it was mostly treeless. It was a tangled thicket of brambles not unlike what they had crushed their way through a few miles back. They retreated 80 yards to a small grove of dead trees. Yrag pushed his way in, breaking some branches so he could pull in the mule behind him. After lashing the reins to a branch, Yrag emerged with a brace of torches in hand from his saddle bags.

"We can carry more provisions in if you like, or keep our initial foray short just to get a feel for the place," Yrag explained as he strapped the torches to the inside of his shield.

Tenser and Ehlissa looked at each other for guidance from the other, but after a short pause Tenser said, "Shorter is fine."

"Very good," Yrag said. "Then let's head back up to the gatehouse." 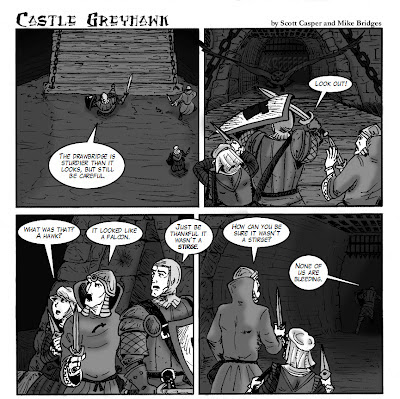 Click to enlarge or go here.
Posted by Scott at 7:18 PM 4 comments:

It came slowly into view, stone by stone, from the tower, roofs, and parapets on down. It loomed larger and larger as they drew closer. Tenser and Ehlissa had seen castles before, and some larger than this, but there was still a sense of awe of this place.

And it was quiet and lonely. Terrifying in its apparent emptiness, moreso than if a bandit guard had been atop its walls, like back at the fort. 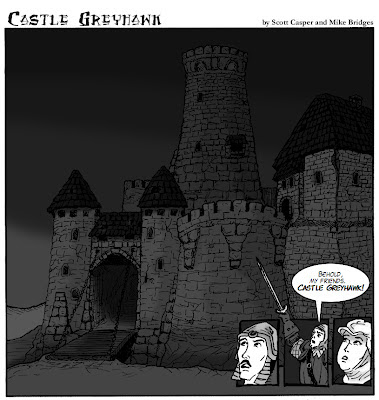 Click to enlarge or go here.
Posted by Scott at 7:09 PM 8 comments: