"It was good to see you solve your problem with your wits," Yrag said, "but why not a spell?"

"I've never seen centipedes so large," Ehlissa said when they were moving again.

"A mad demigod's power bleeds into all the surrounding land, making whatever grows here more dangerous."

"And you would love to add his spellbooks to your own, I suppose," Yrag said. "Like I warned you before, the monsters of the castle will not give up their treasures easily." 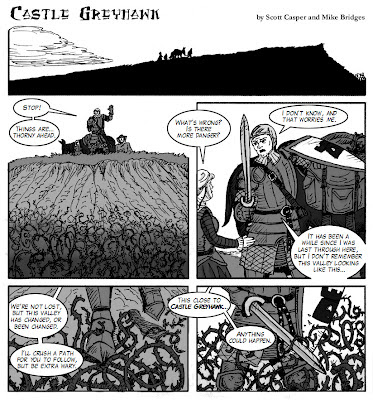 There were, of course, worse things than being stuck up in a tree, in the middle of the Cairn Hills, and not knowing if your plan had killed all the giant centipedes or not.

Take, for example, Svenny. Widely reputed to be the ablest fighting man to ever come to Blackmoor, Svenny had just killed his 108th orc when the cumulative effect of so many light wounds overcame him and he swooned into unconsciousness.

An endless stream of fresh orcs were climbing over the corpses of their comrades piled high in front of them. While the balrog that had allied with them watched their backs, Mello and Debelfry tossed sacks of gold onto Svenny's chest before lifting him up and carrying him out of the great hall of the Orc King Frederick.

So, yes, there were far worse things than being stuck up in a tree and not knowing if there were any centipedes left up there with you. But, at the present, Tenser and Ehlissa lacked the perspective to appreciate it. 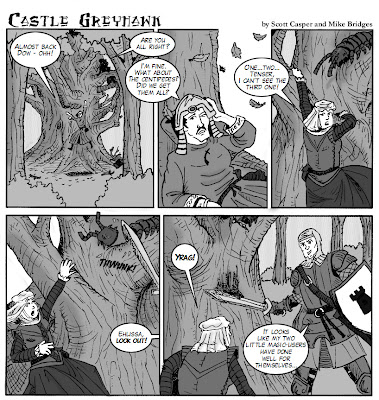 For larger viewing, click on the image or go here.
Posted by Scott at 10:47 AM 2 comments:

Tenser pushed at Ehlissa's back, urging her to climb higher, as a desperate plan developed in his brain. He reached several times for the dagger at his side, still in its scabbard, but hesitated to rely on its reach being long enough to keep his arm out of biting distance. Instead of centipedes, smaller branches bit at his face and snatched at his sleeves and the lower hem of his robes. Ehlissa faced worse resistance above, as the branches grew both smaller and more numerous. Small enough for Tenser's plan...