Tenser finished the last of the six kobolds sleeping before him, grabbed the little creature's tunic, and used it to wipe off the blood that was thick on his blade and hand.  The tunic was baggy and, upon inspection, both cut and pinned down to the kobold's size.  Perhaps it had once been a fine cote, looted from the barracks of the castle, or even taken off the body of some hapless victim the kobolds had themselves murdered.  This second theory made Tenser feel a little better about what he had done and he clung to it as truth.

There was little time for introspection.  There was still some sound of fighting in the other room, or perhaps it had moved on past that already, so dim had the clash of weapons and shields become.  Nor could he hear Yrag or Ehlissa shouting now.

Tenser parted the curtain and came back through the pillored hall to the entry room, only to spy Yrag and Ehlissa standing there, watching the northeast doorway.

At Tenser's approach, Yrag and Ehlissa snapped out of their passive stares.  The kobolds that had tried to ambush them from behind had been pushed back by Ehlissa's charmed kobold and the danger there seemed to have passed for the moment.  They turned away, with Ehlissa ready to follow Tenser and explore the new room he had found, but Yrag wanting to discuss whether they should press their advantage over the northeast kobolds. But first...

Yrag followed through on his shield bash, knocked the little kobold on its rear, and then stomped on its chest with his booted foot.  All the while, Yrag kept an eye on the next kobold, waiting to see if it wanted to engage him in melee after throwing its spear.

Ehlissa watched on, marveling at her little charmed kobold that tried valiantly to hold the door and keep its former comrades from reaching her. 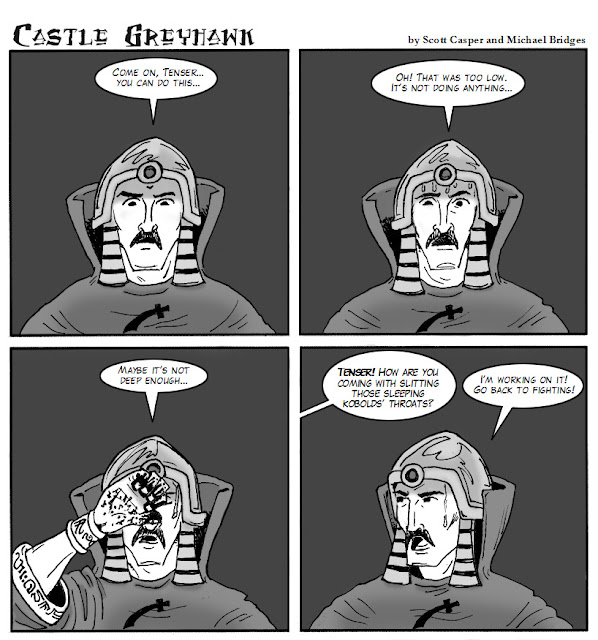 Tenser braved parting the curtain to the next room. He could not see much of this other room by the light of his dropped torch, a short distance behind him, but he could tell that no one was moving inside the room. The floor, however, was littered with the bodies of four more sleeping kobolds, caught in the radius of his sleeping spell. "Oh dear..." Tenser whispered out loud. This encounter was shaping up to include an awful lot of kobolds.