Now everyone could hear them -- heavy footfalls echoing from the back of the chamber.  There could be any number of entrances to this cavern from its shadowy recesses, but Yrag had seemed confident from the start what direction the sound was coming from.  Silently, the archers formed up into a forward line, with the three magic-users protected behind them.

"This chamber is too wide," Yrag whispered.  "If they try to outflank us, fall back."

"Are you ready?" Robilar whispered; it was directed at Serten.

Serten was already re-wrapping his enchanted coin in the strip of cloth he kept it hidden in when not in use.  The spell of light cast on it would never fade, but it did shrink as the coin was hidden by more folds of fabric and darkness fell over more of the cavern.

Bowstrings were pulled back in readiness.  More footsteps.  Whatever was there was trying, badly, to sneak up and ambush them.

Serten tossed the bundled coin, while a ring at the end of the strip remained on his finger.  The bundle flew through the air, unwrapping as it arced upwards... 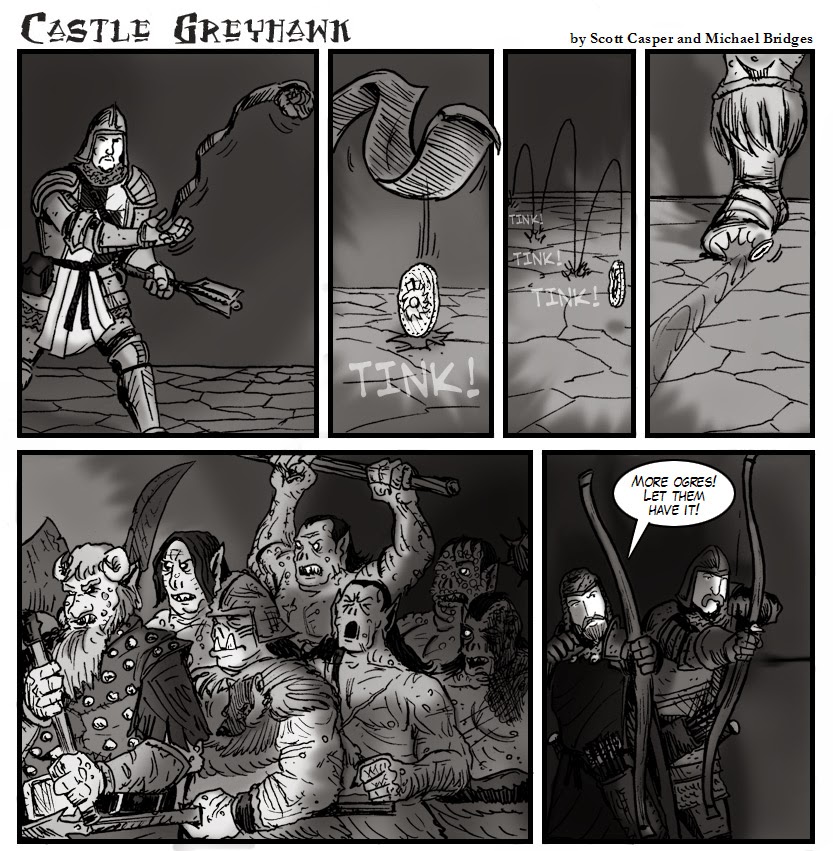 "None of us are expendable," Terik said, as he looked to the others.  It was time to get something off his chest that he thought needed to be added to the conversation.  "That's what henchmen are for.  Why don't we just send someone back up to our baggage camp and get some of those orc mercenaries we're using down here to check this out?  And if the statue turns out to be trapped -- we only lose an orc or two.  Besides, I don't like how many orcs we left back at camp.  What if Bigby can't control them all?"

"What if one person gets lost on the way back, or runs into some wandering monster?" Tenser countered.

"And what makes you think Bigby can't handle them?" Tenser asked.

The three of them began to debate the issue with equal enthusiasm, with Serten stepping in to try and moderate.  Murlynd, however, pulled back Yrag and Mordenkainen a step back to discuss something with them.

"I was wrong," Murlynd said.  "We must have been in El Raja Key before.  This cavern, this statue -- I've been here before, and this is definitely under Castle Greyhawk."

"Is this the Great Stone Face enigma I have heard so much about?" Mordenkainen asked.

"No, that is several floors above us," Murlynd answered.

"That's right; I've seen the Great Stone Face and this looks nothing like it," Yrag added.  "How far down in this dungeon have you been, Murlynd?  And how deep does it go?"

If Murlynd had intended to answer, he was cut off by Robilar, who was shushing everyone with the signal of a raised arm...