Ehlissa rushed to greet her old friend, and then she and Tenser exchanged a quick hug.

"Come in, make yourself at home!" Ehlissa said. "Here, let me clear off a place for you to sit. Shoo!" she said to a songbird on a stool.

"I did want to let you know I made it back safely," Tenser said as he checked the stool for any bird-created surprises that might have been left behind.

"I'm glad you did," Ehlissa said as she looked around for something for her to sit on. "You know I always worry about you going back to Castle Greyhawk. How is the old place?"

"Well, you know..." Tenser said, but he left it at that for the moment. He was never sure how much Ehlissa wanted to hear about the dungeon, so he would wait for her to prompt him further. 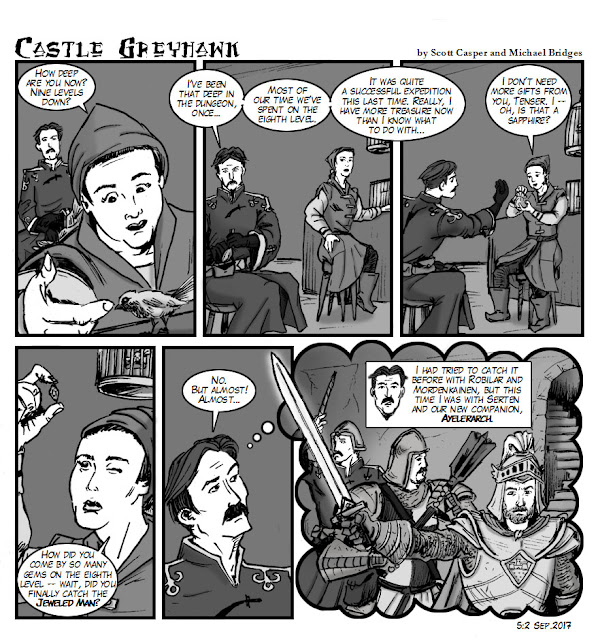 Time passed, healing wounds and moving people down the paths of their lives, drawing friends closer to or further from each other at every new turn.

Castle Greyhawk still beckoned in the wilderness near the City of Greyhawk, drawing adventurers from far and wide. Either systematically or by wild luck they slowly explored and mapped out every square inch of its famous dungeons, level by level, with new stairs always being found leading deeper and deeper into the bowels of Oerth. Many noted that the levels changed over time. Some found evidence of a mysteriously never-encountered construction company at work in the dungeons, but this mystery company never seemed to be able to keep far ahead of the relentless push to explore new areas.

Other forces were at work in the dungeons -- with so much loot coming and going, entrepreneurial forces took over choke points in the dungeon and tried to extort treasure from those coming back out. There was a clan of The Dwur -- dwarves -- controlling one, and a company of Olves -- elves -- guarding another, plus a giant guarding still a third.

Despite these challenges, Tenser continued to explore at Castle Greyhawk. He had grown greatly in power in the last year. His Wand of Paralyzing he had used on a white dragon back then was no longer his most powerful magic item. He had mastered spells now that he did not even know existed a year ago.

Tenser was often looking ahead to his next venture, but sometimes he was interested in looking back.

Tenser disliked Wayfarers Row. It was an old street, though not as old as some in the Old City, and it had stubbornly held onto its name despite the fact that no one could remember why it was called that. A better name would have been Magicians Row, as that is what the street had become. Here was a double row of shops where magic was for sale. The magicians were almost uniformly disillusioned former students of the Wizards College, men and women who had thought the mystic arts was an easy route to prosperity, found they had graduated heavily indebted to the college and with only a handful of parlor tricks to show for it. The smart, or lucky, ones had found ways to market what they knew to people who could afford no better.

So here was Rasche's Courtship Service, launched by a charm person spell, and Blume's Somnambulatorium was inspired by a sleep spell. These shop names were displayed on cheap plaques affixed to peeling plaster facades. To Tenser, Wayfarers Row represented the weak, ineffectual sort of people who had a lofty goal once, but did not try hard enough to attain it. He held them in a special sort of disdain, knowing that just a few miles away they could have sought adventure and found treasure enough to let them live like kings when they returned to the city.

There was only one reason Tenser kept coming back to Wayfarers Row and that was Ehlissa's Bird Shop. Halfway down the row of shops, on the right hand side, was one that sat a little taller and a little wider than the others. Its beams did not sag and its plaster was in better repair. It had a large shop window that stayed propped open all day and allowed people passing by to see a large cage full of songbirds of all colors. The cage was made from a fine, silvery, sturdy wire that had resisted more than one burglary attempt. It should have for the amount Tenser had helped pay for it -- since the wire was crafted from mithril and forged by the dwarves of the Cairn Hills. It had been a present for a dear friend... 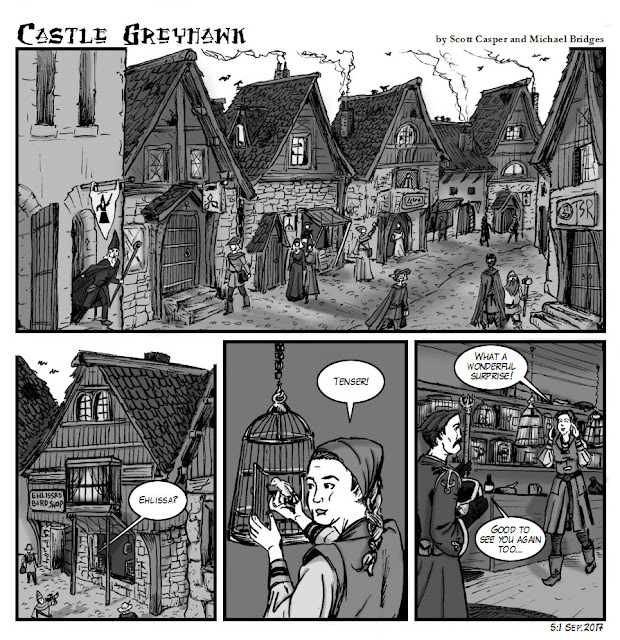