Ehlissa had been cleaning puke off a table. It had been just over nine months since Tenser had last talked her into going adventuring to the castle. She had helped kill some hobgoblins, but nearly got her arm sliced off in the fight. Clerical magic had healed the injury, but it had hurt so bad…

Although Tenser would come back from Castle Greyhawk with stories of fabulous riches unearthed, the take always seemed leaner anytime Ehlissa went along. And she did need money. The Wizard’s Guild of Greyhawk was not an inexpensive institution, and Ehlissa had debts to pay. Tenser had helped her on occasion, when she was falling behind on payments, but she hated to be so beholden to him. She still liked him very much, but it had long since become clear that her affection for him was as invisible as if it was cloaked by magic.

Cleaning puke off of tables was far from ideal work for a young lady with her arcane knowledge and magical skill. She wanted to work as a governess for a rich family. Many hired governesses who knew how to watch for magical talent and foster it. No such opportunity had presented itself yet, so Ehlissa busied herself here, at the Inn of the Green Dragon. Robilar, that roguish friend of Tenser’s, had an interest in this place and had helped her land the job. He had seemed at first to expect something in return, and Ehlissa was surprised and relieved when he still helped her even when she said no. Yes, there were indeed worse things than cleaning puke off of tables.

The Green Dragon was becoming a popular gathering place for the rising class of adventurers in the city. It seemed everyone who could swing a sword or cast a spell was heading out into the surrounding wilderness and coming home with stories of new dungeons being discovered, or some new rooms previously un-looted under Castle Greyhawk. Even those who came back empty-handed seemed to have bragging rights. And did they ever brag. 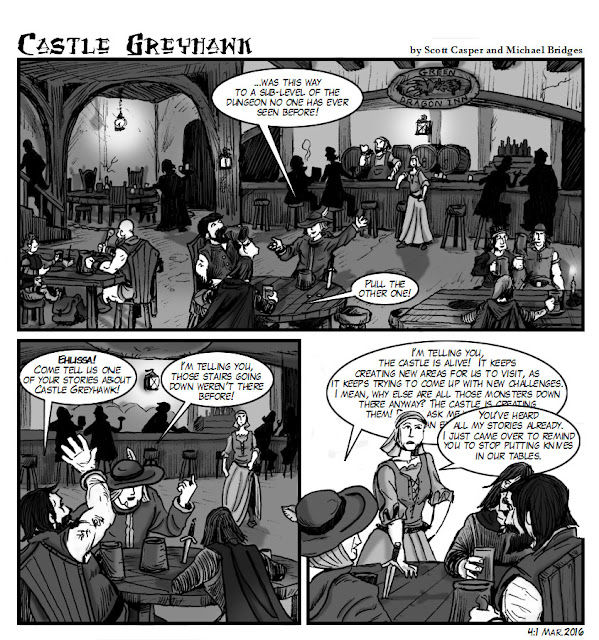